A few days ago I had the opportunity to visit my father on his death bed. Our relationship had been strained for years, but we had finally found some reconciliation and forgiveness. It was a touching affair where I held his hand and prayed with him. We knew his time was short, and I didn’t wanna leave, but I knew that I eventually had to go.

I remember praying and looking into his eyes. I told him, I loved him, he was the best dad I’ve ever had, and I wished we had more time. Then this morning, I received a phone call. He passed away overnight, taking his final breath and going into eternity.

Our relationship used to be a train wreck. In the last few years. We had come a long way. If you want to read more about this, please download my ebook called “Hurricane Jerald”.

What Do You Mean To Be Reconciled?

My father wasn’t a perfect father, in fact, he was abusive growing up. It got so bad that my mother kicked him out and divorced him. These things needed to happen or things would’ve gone down a dark path for me.

I love you, I forgive you, but you’re no longer a part of my life.

I said this for a few different reasons.

When I was 19 I moved to Jackson, Mississippi, and joined a ministry program called ‘Masters Commission.’ I attended the program because I felt the call to do so, and I needed a change from my life in Minnesota.

Moving to Mississippi was an eye-opener. It was a different world down south. The food was great, people talked funny, and the seasons didn’t exist (I actually met people who’d never seen snow).

However, all these changes highlighted a problem in my life. I was still the same angry kid. Who hated his father and hadn’t learned to let things go. I was wound up so tight I could burst, and didn’t even know it.

During the 5 years I lived in Mississippi I learned to let go of my anger and hate. I learned to forgive my father and let go of the pain and the heartache he’d caused me. After moving home, I ran into him and panicked when I realized the anger in my heart was gone.

If you want reconciliation with someone, you’ll have to understand one thing. Forgiveness always precedes it. You can’t reconcile when you’re full of hate.

In the last 2 1/2 years, I’ve been able to discover and decipher my father’s motives when I was growing up. Before I begin this I’d like to reiterate;

While in Mississippi I learned to forgive him, and now God wanted us to reconcile. This was the hardest part because it had to be done in real-time with two separate hearts. We had battle scars and didn’t want peace, but knew we needed it.

Over the last two years, my father and I have come to a point of reconciliation. Both of us have let go of the past and we’ve looked toward the future. He had a bad diagnosis from the doctor. With cancer in his body, I wondered how long that future would be, and he was optimistic.

He fought for 3 years and last night went home to his reward. From him, I received the greatest gift.

The War Inside Our Hearts How To Find Reconciliation

Last night I attended a worship night at my church. I debated about going for a while and new I had a lot of baggage to release. These are the times you should go. So I attended.

During the service, I heard God say 2 distinct things to me.

When you’re a boy growing up without a father, there’s always a sense of loss. It’s like a piece of you disappeared and you don’t know how to get it back. Because of this, I’ve experienced self-doubt, and a lack of empathy, and overall became a dick a few times.

The TV show ‘How I Met Your Mother,’ shows this pain really well through the character of Barney Stinson. I’ve cried multiple times watching the episode called ‘Legendaddy.’

For years I’ve told myself this was how I needed to live my life, even though this was life and there was no escape from it. However, in the last 24 hours, I’ve felt completely different about that subject.

When God told me, “Tonight you are made whole.” I didn’t feel a change. I felt no mighty rushing wind, no thumping in my chest. Nothing happened.

However, when I woke up this morning, my phone was ringing. It was my sister calling to say that my father had died, but something was different inside me.

There was weightlessness about me, and I couldn’t shake it. I knew where my father was, he was in heaven, and when he died God sent healing to me.

It was his final gift to me. The piece had returned, and it felt like new.

My Father Went Home But We Had Reconciled.

Towards the end of the night, I felt God tell me this, and I accepted it. Then a deep feeling of terror started to creep in. What if I never get to see him again? Then, I realized I’d told him everything I needed to, and I would see him again. He was going to heaven, and he’d no longer be in pain. This I am sure of.

The Process Of Reconciliation

This process isn’t a complicated one, but it is difficult. Just like I laid out above the first step is always Forgiveness. The major thing to watch out for when reconciling is pride. Sometimes it’s hard to see the other side of things when you’re full of yourself. If you’re having issues with reconciliation, go back to forgiveness. Usually, there’s something left to let go there.

Forgiveness is the first step, when you forgive you are saying I’m choosing to let this pain go and heal. I will no longer allow myself to be held back by the choices of this person.

Look into your heart, and make the decision to let go. Sometimes it’ll happen in an instant and other times it happens over time. Mine took the better part of a decade but it was worth it.

I know I’m simplifying this by only making 2 steps. Truth be told every time you reconcile with someone, it’ll be a completely different situation. However, I’m confident these steps will be the same every time.

You’ve gotta reach out, and swallow your pride. Pride is the one thing that will stop you from reconciliation, and if I hadn’t done that…

My father would’ve passed away last night, and I wouldn’t have found healing. I’d still be in pain and I’m not sure how I’d find peace. There’s gotta be some sort of path, I don’t know what it would be, and it’s probably more difficult.

Take the time right now to let things go, I don’t know where you are in the process of forgiveness and reconciliation, but if you’re unsure.

This article is dedicated to my father. Who gave me the greatest gift? Life, Forgiveness, And Reconciliation were all major lessons you’ve taught me. I’ve never wanted another Dad because you made me who I am. 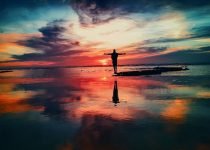